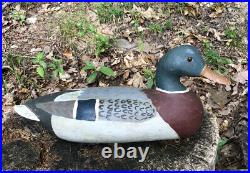 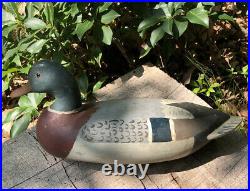 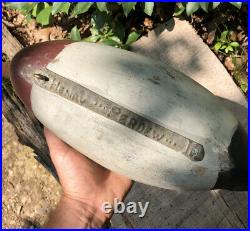 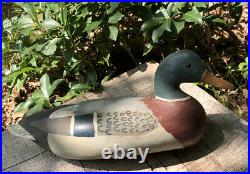 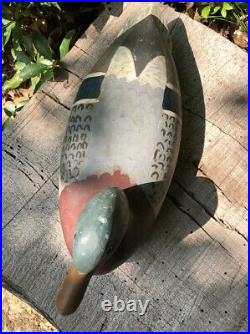 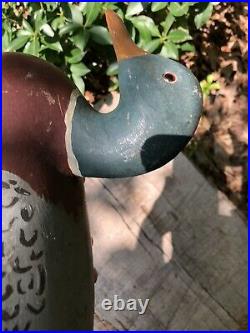 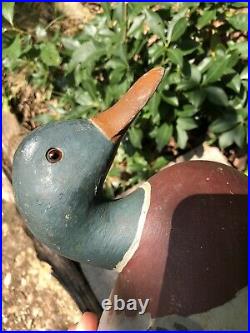 HERE IS A RARE ORIGINAL CIRCA 1930s-40s Working hollow bodied DRAKE Mallard decoy with a slightly turned head made by one of the greatest carvers in the United States during that time. Has original glass eyes, original signed lead keel weight with brass eyelet - measures 15.5 inches long. Has an old working repaint.

Body is in overall fine condition. No splits, chips out of wood or damage. My father had many Perdew Calls and these he cherished and had some personally carved calls for him made by Charles son , Haddon Perdew in the 1980s.

Decoy Just exhibits a little use wear. Overall wonderful condition considering the age. Made by Charles Perdew of Henry, Illinois, Charles and his wife combined their talents to become famous folk artists in Central Illinois and throughout the rest of the United States. Charlie was born near Henry in 1874 and was a hunter and carver of decoys. Edna was born in 1882 in Henry and their marriage in 1902 formed an artistic partnership that lasted almost sixty years.

For much of that time, Charlie carved and Edna painted from their home and workshop in Henry. Charlie Perdew died in 1963 and Edna survived him until 1974. The story of this remarkable couple and their artistic legacy has been beautifully portrayed in the book "PERDEW: An Illinois River Tradition " by Ann Tandy Lacy and published by David Galliher in 1993. If necessary, Perdew utilized timbers from old bridges, beams from empty buildings or leftover wood from sash and door factories to his advantage.

From these sources, he carved semi-hollow three¬piece decoys. These early decoys were V-shaped and had large heads with full cheeks.

Later decoys were still carved from pine, but these were two-pieced with more of a rounded bottom and fuller chests. For the sake of practicality, Perdew's gunning decoys, both regular- and over-sized, were hollow, while his half-sizes and miniatures were solid. All Perdew decoys received detailed head carving and some had raised wings and slightly turned heads whittled with a pocket knife.

Perdew did the majority of the carving with a drawknife, wood gouge and whittling knife. Because of the belt sander Perdew used, the back of the neck on some of his decoys is somewhat ridged, and the end of the body under the tail is pointed instead of rounded. Perdew reproduced just about every species common to the Midwest.

Both he and his wife Edna painted the decoys. She created a look with combing that was feathery, while he used a stiff brush and did bold outlining. To identify what he and his wife produced, Perdew hand-cast weights reading Henry...

The Perdew name echos through the world of antique collectibles. As a pioneer of the immensely creative school of early 20th Century Illinois River carvers, Perdew's work is classic. And to this day almost 50 years after his death they are still functional. Almost everything Charlie made at first was designed for hunting, said Don Clark, an old friend and neighbor whose home is a trove of Perdew's work. He went upstairs to fetch a duck call he bought from Perdew in 1945, which he still uses on the river every year. Soon the sound of a perfectly contented mallard hen floated from the second floor. "I tuned this thing just once when I bought it and I haven't messed with it since, " Clark said.

In his definitive 1994 volume, "Duck Calls of Illinois, " Robert D. Christensen boldly states that duck and crow calls made by Perdew are, unquestionably, the most treasured of all Illinois calls. Almost every one was made on a riverside bluff in Henry, where the broad Illinois bends through some of the more storied wetlands in duck hunting lore. A "river rat" who learned to make a living with his hands, Perdew began carving at the age of 14. His output included gun stocks and smithing, bicycle repairs and general carpentry.

He and his wife, Edna--who died in 1974 at the age of 92--spent two years building and dressing their house by hand, hauling up the hill by cart enough river stones for a massive foundation. The house was completed in 1909, featuring all kinds of mirthful Perdew touches--from "eyebrow" windows to an upper-level porch that enabled him to keep an eye on his pals along the river. By the time Perdew died, the house had begun to crumble with age and neglect. Edna soon moved next door to the home of their son, Haddon, a noted carver in his own right. The item "1930s CHARLES PERDEW Illinois River DRAKE MALLARD DUCK DECOY-CALL-PERDEW WEIGHT" is in sale since Tuesday, August 10, 2021. This item is in the category "Sporting Goods\Hunting\Vintage Hunting\Duck Decoys". The seller is "ashburn95" and is located in Wrightsville, Pennsylvania. This item can be shipped to United States.