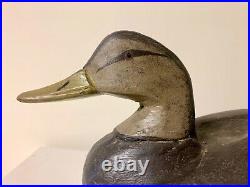 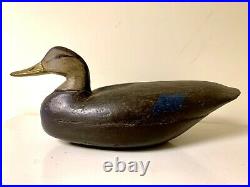 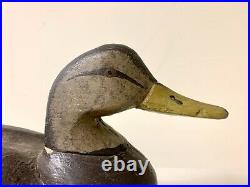 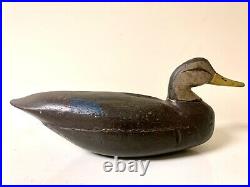 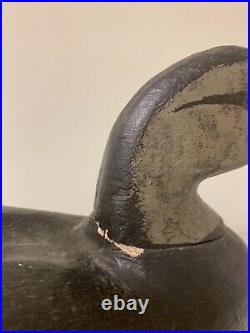 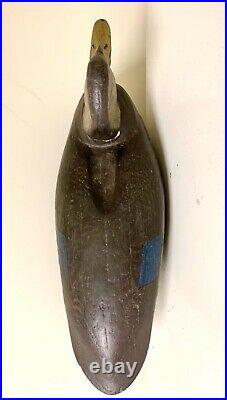 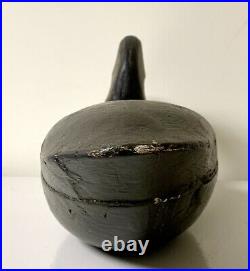 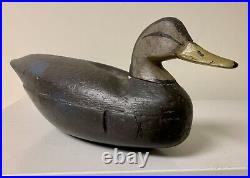 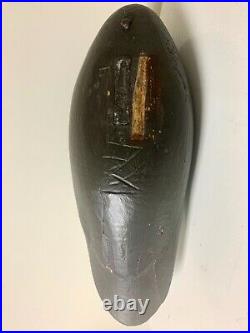 Doug Jester reworked black duck decoy. By this it has a New Jersey hollow body with a Doug Jester re-head and appears to be Jester re-paint. Body may be by Joe King; has an inletted weight. Also has an ice groove.

I suspect this decoy migrated south and was used around the Chincoteague marshes , and as often happens, it was damaged and salvaged by Jester with new head and paint. I worked on Chincoteague in 1985; started decoy collecting there at that time. Have held a few Jesters , along with Hudson, Watson, and Hancock. The black duck head here appears to be legit with grooved beak. Note the LAST pic here of black duck made by Joe King (Manahawkin NJ , 1835 - 1913) ; (this is not the duck for sale ; head blanched out - showing body shape only).

The body form on the sale duck looks like a King other thoughts , let me know! The bottom has a strip of wood missing from what? And , on the other side of the weight is a carved letter E.

(see pic of bottom - just to the left of the top of the weight). Chincoteagues Doug Jester (1876 - 1961) was carving by the time King died, thus I presume this decoy dates from 1913 , possibly into WWI years.

Carved on the bottom are large initials MM possibly WW? ; again presume these are the initials of the original hunter, painted over by Jester. You decide if you wish this bird is to be part of your collection. Time for this bird to enjoy a new home.

The item "Antique Chincoteague Doug Jester reworked hunting black duck NJ Joe King decoy" is in sale since Tuesday, November 23, 2021. This item is in the category "Sporting Goods\Hunting\Vintage Hunting\Duck Decoys". The seller is "jdejam4" and is located in Frederick, Maryland. This item can be shipped to United States.