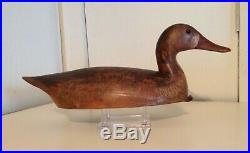 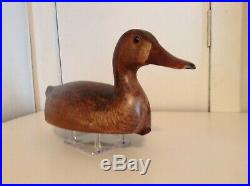 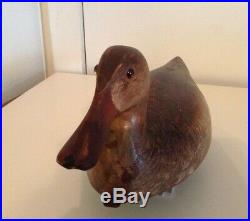 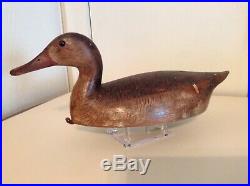 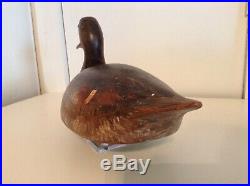 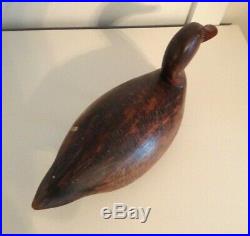 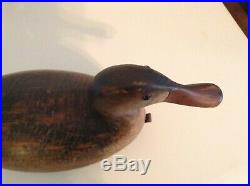 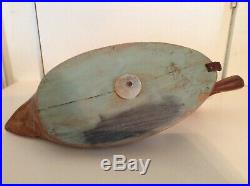 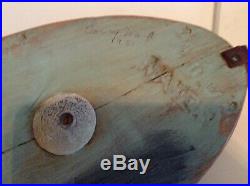 VINTAGE TORRY WARD SHOVELER HEN DECOY, OP, DELTA MARSH, SIGNED, BRANDED. A Nice Shoveler Hen Decoy by Torry Ward, in good condition, with solid body, glass eyes, and OP with some wear, and a check on the bottom. It measures about 17, with original rigging. It is signed and branded on the bottom. Please look at all pictures as they are part of the description.

Torry, in his teens, acquired hands-on experience in waterfowl studies and game management in the 1930s at the Delta Waterfowl Research Center. The Center was created to study ways to protect waterfowl populations and habitat. He then finished high school, which he attended in Portage Le Prairie 16 miles south of Delta, He became a Provincial Game Warden in the mid-1940s, He also worked as a taxidermist, a Caterpillar tractor operator, and a part-time taxi driver. Torry married in Portage Le Prairie and settled on Garrick Creek, just south of town, where he and his wife raised three children. Torrys first decoys were carved of native cedar, and he later tried softer, lighter woods, like sugar pine.

He also incorporated new painting techniques, like combing and feather blending, and switched from oil and lead-based paints to acrylics, which dry much faster. Torry carved with almost every species of waterfowl, from ducks and geese to swans and grebes. The March/April 2002 issue of Decoy Magazine has a full article on Torry. The item "VINTAGE TORRY WARD SHOVELER HEN DECOY, OP, DELTA MARSH, SIGNED, BRANDED" is in sale since Saturday, November 23, 2019. This item is in the category "Sporting Goods\Hunting\Vintage Hunting\Duck Decoys".

The seller is "rodrius_ipfdeb" and is located in Columbia, South Carolina. This item can be shipped to United States.